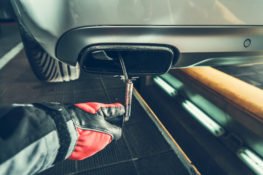 There’s an old saying that “no news is good news.” Unfortunately, that may be the case for Mercedes-Benz’s parent company Daimler when it comes to the ongoing governmental probe for emission violations. Though the U.S. government has yet to impose fines or recall requirements on the manufacturer, the company has already been held responsible for emissions discrepancies with their diesel vehicles. Facing nearly a billion dollars in fines and major recalls in Germany after that country’s own investigation, Mercedes-Benz presumably will face continued scrutiny in the U.S. as that criminal investigation, and a class action, continue. And as the Mercedes-Benz emissions scandal wears on, owners will be paying close attention to see how it affects them and their vehicle(s).

The LA Times recently highlighted the timeline the Mercedes-Benz emissions saga has extended. Despite the fact that consumer advocacy groups have requested that the probe receive more attention and be concluded in a timely fashion, there is no clear indication of when the U.S. government will complete their efforts. By comparison, the German government’s own investigation, taking a mere year and a half to complete, shows that it would be extraordinary for the American probe to not result in similar penalties for the manufacturer … and likely major changes to these vehicles.

In that German investigation, again conducted over roughly a year and a half, Daimler was ultimately determined to be responsible for manufacturing diesel vehicles that did not comply with legal requirements regarding emissions controls. That investigation resulted in fines totaling nearly a billion dollars and multiple recalls, involving 60,000 vehicles and then, later, hundreds of thousands of vehicles being recalled for non-compliant emission setups. Those recalls came after the manufacturer had already recalled over 3 million vehicles across Europe for discrepancies with their emissions systems. The extended nature of these European probes, which seemingly continues to grow by the month, highlights the reality that problems with the emissions systems in Daimler vehicles is not limited to a select group of cars or trucks but, instead, a wide range of the company’s international lineup. This is becoming less of an issue about whether a certain model is outside of emissions limits and, instead, more about what the company chose to do in circumventing legal standards on emissions.

Only time will tell about whether these emission discrepancies were somehow only limited to European models or if the class action lawsuit’s allegations prove true. Should those allegations be proven and it is determined that Mercedes-Benz vehicles sold in the U.S. were in fact built with ‘cheat devices,’ those vehicles will face their own software update requirements. How those updates affect MPGs, performance, acceleration, overall reliability, re-sale value and more remains to be seen. Unfortunately, historically, emission updates have not been kind on owners and vehicles alike.

In the United States, the following Mercedes-Benz diesel automobiles are currently subject to the ongoing class action lawsuit:

Our firm recommends that American owners be proactive in protecting their legal rights due to the ongoing lawsuits and governmental investigation regarding Mercedes-Benz emissions. A class action settlement that is eventually announced and finally approved, intended to be a compromise between Class Counsel and the manufacturer can, unfortunately, fail to meet the needs and expectations of vehicle owners. Instead of undoing the harm caused and leaving owners with little benefit, these class action settlements can sometimes be more helpful in limiting the manufacturer’s potential liability (while failing to properly compensate owners). Our law firm represents owners of a variety of different vehicles who opted out of their own class action settlements due to concerns about the compensation that was offered. Our firm is taking similar action for owners of these Mercedes-Benz vehicles in America who want to review their legal options outside of the class action settlement.

Important Notice: The preceding information represents the opinions of Stern Law, PLLC, that should be thoughtfully considered by you and lawyers with whom you should consult. Despite our opinions and views expressed above, and because every case is different, nothing here can or should be understood to represent a guarantee of success or that every owner will always do better by opting out and suing Mercedes directly. Questions concerning the terms of the Mercedes BlueTEC class action settlement should be directed to the class settlement’s administrators, whose website (including documents) can be accessed by clicking here or by calling 877-313-0170. This article should not be considered a solicitation for legal services by Stern Law, PLLC, to anyone currently represented by legal counsel.