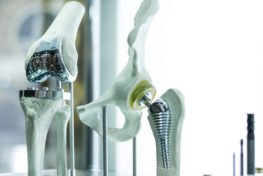 Although the Stryker ABG II-Modular-Neck Hip Stem and Rejuvenate hip replacement systems were designed as a safer alternative to earlier metal-on-metal hip implants, such as the DuPuy ASR hip implant system, thousands of lawsuits have been filed based on similar adverse side effects. Stryker announced a voluntary recall of both of these hip implants on July 6, 2012. The Food and Drug Administration (FDA) has received numerous adverse event reports complaining of complications associated with “fretting” and corrosion, which causes particles of metal to slough off into patients bones, tissue, and bloodstream.

Free Confidential Case Evaluation: If you have suffered serious complications after implantation of a Stryker hip implant, Stern Law, PLLC invites you to contact us immediately at 844-808-7529 for a free case evaluation. You may be entitled to financial compensation, and attorney Ken Stern and his staff can answer your questions and explain your rights.

What Are the ABG II Modular-Neck Hip Stem and Rejuvenate Hip Implant Systems?

These neck-stem implants differ from typical hip implant systems based on a “monoblock design.” The conventional design includes a single piece for the neck and stem. The Rejuvenate and the ABG II include multiple stems and necks. This innovation was intended to allow surgeons the benefit of components that offered a more anatomically accurate fit based on the specific patient. The implants were not supposed to undergo corrosion and fretting from friction of the neck and stem junction like previously recalled ball and cup metal-on-metal implants. The stem components of the two recalled hip implant systems are made of a proprietary titanium alloy blend comprised of zirconium, titanium, iron, and molybdenum. This titanium blend was not supposed to be vulnerable to fretting and corrosion.

Why Stryker Neck and Stem Implant Systems Were Recalled

The Stryker neck and stem hip implant systems were designed to mitigate the risk of fretting and corrosion caused by the friction of metal-on-metal experienced with prior recalled hip replacement systems. However, thousands of people have filed lawsuits after experiencing similar complications. The neck components of the two recalled hip replacement systems are comprised of cobalt and chromium while the stems are coated with titanium. Although these implants are not technically metal-on-metal implants, they undergo similar deterioration when the metallic parts wear against each other where the neck and stem intersect.

The abnormally high levels of metal ions can lead to the following complications:

Some studies also have suggested a link between absorbed metal ions and heart problems, neurological issues, and damage to organs that include the spleen, kidneys, lymph nodes, and liver. Cobalt is considered an exceptionally toxic substance inside the human body.

Since the stem components of these hip implants are driven deep into the femur, revision surgery is difficult for surgeons and risky for patients. The revision surgery typically involves more intense pain than the original procedure to implant the hip replacement. Further, the femur might be weakened by abnormally high levels of metal ions, which increase the risk of fractures during the revision surgery. Patients have been exposed to repeated revision surgeries, multiple fractures, and reconstruction of the femur.

The FDA received sixty adverse event reports involving fretting, corrosion, and metal toxicity of the ABG II and Rejuvenate hip implants. In response to these reports, Stryker issued an “Urgent Safety Alert” in April 2012 indicating the risk of “excessive metal debris and/or ion generation” caused by fretting and corrosion at the junction of the neck and stem. According to the alert, this sloughing of metallic debris could result in excessive levels of metal ions in the surrounding joint space. As adverse event reports continued to flow into the FDA, Stryker announced a voluntary recall of both the ABG II and Rejuvenate hip implants three months after issuing the safety alert. The Canadian health authority also recalled these two Stryker implants before the device manufacturer’s voluntary recall.

While Stryker has announced a reimbursement program for patients implanted with the ABG II and Rejuvenate hip implant system, patients without legal counsel might find that this program is a trap for the unwary. Broadspire Services, Inc., a third-party risk management company, is managing the reimbursement program. The first problem with this program is that patients are only being compensated for “testing, treatment, revision surgery, and other costs related to the recall.” This compensation presumably does not include pain and suffering, disability, emotional distress, or impaired quality of life. In other words, a personal injury lawsuit will provide access to pursue far more extensive compensation. The second problem with the reimbursement program is that patients are being required to execute medical authorization forms. If patients execute these documents, they are surrendering their right to privacy of their medical records and permitting a search for medical information that can be used to mitigate the amount received by the patient.

Some representative examples of plaintiffs who have filed lawsuits against Stryker based on complications associated with their defective hip replacement include the following:

Symptoms of Complications from Stryker Hip Replacement Fretting and Corroding

If you received a hip implant, you should review your hospital records to determine if you were implanted with an implant that has been recalled. If you are unable to determine the type of hip implant you received, we invite you to contact us so that we can help you identify your hip replacement and evaluate your legal claim.

The FDA has indicated that development of certain symptoms three months or more after implant of the ABG II and Rejuvenate hip implant systems include:

Speak with a Proven and Compassionate Stryker Hip Implant Attorney

Stryker defective implant attorney Ken Stern is accepting lawsuits from patients who have experienced serious complications after implantation of these medical devices. He can advise you about pursuing an individual lawsuit in state court or joining the MDL litigation in federal court. Stern Law, PLLC is committed to helping our defective Stryker hip implant clients obtain the financial compensation they need quickly. We invite you to contact Stern Law, PLLC today at (844) 808-7529 or submit an online form for assistance.