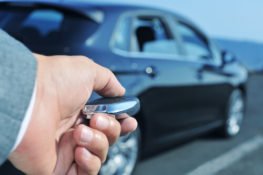 Automakers promoted keyless ignition systems to consumers as a convenience that prevents locking a vehicle’s keys in the car and eliminates the need to insert and rotate the key to start a vehicle. However, keyless ignition vehicles from many manufacturers have contributed to severe injuries and deaths caused by carbon monoxide exposure and rollaway vehicle accidents.

Schedule a Free Lawsuit Evaluation: If you or a loved one has suffered injury or you have lost a family member caused by your keyless ignition system, we invite you to contact our defective vehicle attorney at Stern Law, PLLC today. You might be entitled to compensation, and our lawyers can help you file your lawsuit.

Keyless ignition vehicles involve the substitution of a “fob” for a traditional key. A fob resembles the remote control device that vehicle owners use to lock and unlock their car and turn their alarm on or off. The vehicle engine cannot be turned on unless the fob is located within the passenger compartment of the vehicle. If the fob is inside the vehicle, the car engine can be turned on by pushing the ignition button. Continue to our article, “What You Need to Know about Keyless Ignition Lawsuits” and our article, “Do I Need a Lawyer?“.

Why Are Keyless Ignition Systems Causing Injuries and Deaths?

Traditional ignition systems require a vehicle owner to shift their vehicle into the “park” position and rotate the ignition switch to the off position before removing the keys and exiting the vehicle. Because drivers cannot leave their vehicle without their keys, they remember to put their vehicle in park and to turn off the engine.

Keyless ignition systems do not require the transmission to be shifted from the drive position or the ignition switch to be rotated to leave the vehicle with a fob, which is the keyless ignition system’s version of a “key.” Because drivers can exit the vehicle with a fob without performing either of these tasks, families in homes with attached garages have been exposed to carbon monoxide after parking their vehicle. Carbon monoxide accumulates in the garage as the engine continues to run, allowing the tasteless and odorless gas to filter into the home. In other cases, people have been injured when a driver forgets to shift the vehicle into drive allowing the vehicle to roll away because the transmission is in the neutral or drive position.

The mass tort lawsuit filed against ten vehicle manufacturers alleges that keyless ignition systems are defectively designed because they do not have an automatic shutoff feature that turns off the engine when the driver exits the vehicle with the fob. If push button ignition systems automatically turned off the engine or provided an adequate warning to drivers when the fob leaves the vehicle, accidents involving carbon monoxide exposure and rollaway accidents could be prevented.

Nineteen people have died, and hundreds more have been injured when exposed to carbon monoxide from keyless ignition vehicles according to KidsAndCars.org. These numbers are expected to rise as more consumers purchase keyless ignition vehicles. Approximately 245 vehicles include a push button ignition system as a standard feature, and 31 other models offer the feature as an option as of January 2016 according to Edmunds.com.

The National Highway Traffic Safety Administration (NHTSA) has received numerous complaints about rollaway accidents involving keyless ignition vehicles, including the report of a man who was hit and dragged by his vehicle after exiting without pushing the ignition button. The most publicized incident involved the death of actor Anton Yelchin. Yelchin’s parents recently filed a wrongful death lawsuit after their son was crushed by his keyless ignition vehicle when it rolled forward after he exited and pinned him between a security fence and the vehicle.

As of August 2016, a formal government recall had not been ordered covering keyless ignition systems, but the National Highway Traffic Safety Administration (NHTSA) has acknowledged the severity of the problem based on multiple complaints. The NHTSA indicated keyless ignition systems constitute a “clear safety problem” in December 2011. The federal agency proposed rules to mandate an exterior alarm be provided to warn drivers who walk away while their vehicle is running. However, no action has been taken by the NHTSA in the subsequent five-year period.

The NHTSA also proposed standards to prevent rollaway accidents involving keyless ignition systems in Fall 2014. However, regulations have yet to be finalized imposing safety features to mitigate the risk of drivers exiting while the propulsion system is still running.

The mass tort lawsuit filed against multiple automakers states that almost five million keyless vehicles have been manufactured without automatic shutoff software installed. The lawsuit alleges that the vehicles are defectively designed because the engines will continue to operate regardless of how far the driver is from the vehicle with the fob. The mass tort lawsuit also indicates that manufacturers of keyless vehicles were aware of carbon monoxide deaths and the keyless ignition problem as early as 2003.

The manufacturers of vehicles of allegedly unsafe keyless ignition vehicles against whom the mass tort has been filed include:

At Stern Law, PLLC, we are currently evaluating potential keyless ignition mass tort claims. Our law firm also is accepting personal injury and wrongful death lawsuits related to rollaway accidents caused by keyless vehicles. We invite you to give us a call today to see if you or a loved one is entitled to compensation for the harm you have suffered. Call Stern Law, PLLC today at 1-844-808-7529, or complete an online contact form for assistance. Contact Stern Law, PLLC today for more information on scheduling your free case evaluation with one of our knowledgeable keyless ignition injury lawyers.