Fentanyl: One of America’s Deadliest Threats 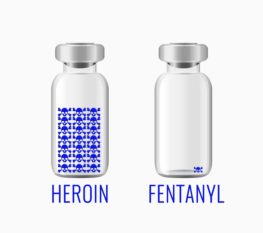 A comparison of a lethal dose of heroin to a lethal dose of fentanyl shows just how powerful this ‘new’ drug is and the threat it poses to the American people. The opioid epidemic continues to get worse and, sadly, because of the introduction of new drugs, is getting deadlier. Originally used as an anesthetic, fentanyl is an example of a new, extremely strong painkiller prescribed to people for chronic pain that, if abused, can easily cause death.

Before going further, if you would like a more thorough understanding of the science and history of this problem, feel free to navigate our website’s main content on Opioids.

According to the Centers for Disease Control and Prevention and as depicted by the image above, fentanyl is 50-100 times more potent than morphine and even more than that of heroin. The Recovery Village reported that this drug is so strong that even inhaling it can cause dizziness with shortness of breath. Originally used as an anesthetic, the substance started being used as a drug after doctors realized how successful it was at relieving pain in small doses. When using laboratory-grade equipment and in the hands of trained professionals, fentanyl definitely has the potential to cause much more good than harm. Though it should be mentioned that morphine is used to treat a wide variety of pain, in fact mostly for chronic pain in efforts including cancer treatment, it is still very clear that if taken incorrectly and without medical supervision, fentanyl can be extremely dangerous.

STAT News reported that New Hampshire, in particular, has been hit hard by fentanyl abuse. 439 drug overdoses were reported in the state in 2015, a staggering statistic in of itself. Of those overdoses that were mostly related to opioids, 70% of them involved fentanyl.

This percentage most likely is due to the illegal sale of fentanyl, a process which can make the drug even more dangerous for users. Unfortunately, in order to increase illegal profits on the drug, something sold as one drug can be laced with other drugs without the buyer’s knowledge. This means that, where someone may be thinking they are using a low dosage of one drug may, in fact, be using a smaller quantity of that substance that is also laced with fentanyl. Because Heroin and fentanyl look exactly the same, there is potential for people to inject themselves with a lethal dosage of fentanyl thinking that it’s heroin.

While these drugs may look similar to the naked eye, they have very different chemical structures that result in different effects to the body. Fentanyl’s strength has a lot to do with the difference in its opioid structure. When taken, the drug hugs the brain’s mu opioid receptor tighter and gets to it faster than other opioids which means that a tiny amount can start the effects on the body much faster and easier.

Unfortunately, because the effect can be so tight on the brain, it is also harder to revive someone who has overdosed on this powerful drug. More Narcan (the overdose reversal drug) is needed to save someone than might originally be needed for a heroin overdose. “In a fentanyl overdose, you may not be able to totally revive the person with the Narcan dose you have,” said Scott Lukas, director of the Behavioral Psychopharmacology Research Laboratory, “Naloxone easily knocks morphine off the receptor, but does that less to fentanyl.”

It’s very obvious that when taken incorrectly, fentanyl has a high potential for death, but the sad reality is too many doctors claim the drug to be both effective and safe, resulting in it being over-prescribed and more readily available secondhand.

If you are interested in finding out more about legal claims associated with opioids or other prescribed substances, contact Stern Law, PLLC, online or by calling 844-808-7529