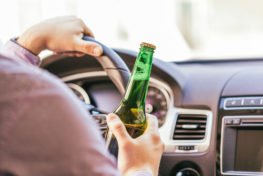 Despite public service announcements and other efforts by government and non-profit agencies, drunk driving is still a cause in thousands of fatal and injury car accident cases each year. The National Highway Traffic Safety Administration (NHTSA) reports that nearly 10,000 people were killed in drunk driving accidents during 2014 and that about 28 people die every day in drunk driving crashes. Every 90 seconds, a person is injured in a drunk driving crash.

Most know that driving while intoxicated is a crime, but it can also subject the intoxicated driver to civil liability if his or her impaired condition causes or contributes to a drunk driving crash.

The Effects of Alcohol

Alcohol is dangerous for drivers because of the manner in which it interferes with the driver’s ability to safely operate a car. When a person is pulled over by the police for allegedly driving while intoxicated, that officer will have the driver perform standardized field sobriety tests. These are physical tests designed to indicate the motorist’s ability to perform multiple tasks at the same time. This is a valid description of how alcohol impairs a driver – it interferes with that driver’s ability to divide his or her attention between the various tasks of driving.

An impaired driver may not:

Any one of these effects can turn the drunk driver’s car into a weapon that can cause serious injury or death to other motorists on the roadway. In some cases, victims are unable to tell if a car approaching them or driving along side of them is being driven by a drunk driver until it is too late to avoid a collision.

How Many Drinks are Too Many?

Many people understand that the “legal limit” for consumption of alcohol before or while driving is 0.08 grams of alcohol per 210 liters of breath. This does not set a hard and fast rule as to what amount of alcohol a driver can consume before he or she can be held responsible for injuries he or she may cause. In fact, the 0.08 “limit” only establishes a presumptive level of intoxication for purposes of criminal drinking and driving statutes. A person can be held civilly liable in a drunk driving accident even if he or she only consumed one drink prior to driving. The determining factor is not what level of alcohol is actually in the driver’s system but rather if the level that is present in his or her blood impairs the driver to such an extent that the driver was unable to safely operate a car. In civil drunk driving lawsuits that proceed to trial, the judge or jury is usually called upon to determine if the drunk driver’s alcohol level impaired his or her driving abilities.

What If I Am Intoxicated, Too?

It is not entirely uncommon for both drivers involved in an accident to be intoxicated to some degree or another. How this situation is handled will depend on a state’s comparative negligence or comparative fault laws. In some jurisdictions, an injured motorist who is also drunk will be able to recover a percentage of the compensation he or she was otherwise entitled to recover from the other driver if the injured motorist’s intoxication contributed to the crash. In other states, any intoxication on the part of the injured motorist will preclude that motorist from recovering any compensation if such intoxication contributed to the accident.

Do not delay in seeking counsel from Stern Law, PLLC if you or a loved one have been injured in a drunk driving car accident. You only have a limited amount of time within which to file a lawsuit against the drunk driver, so I tis important that you act quickly. Stern Law, PLLC will help you prepare your case for filing and walk alongside you as your case winds its way through the civil legal system. We fight aggressively on behalf of clients who were injured by a driver who decided to have alcoholic beverages before driving. Call Stern Law, PLLC today at (844) 808-7529 for dedicated and determined representation in your drunk driving crash case.