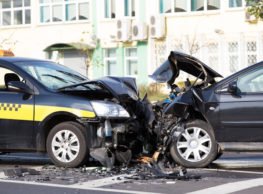 The taxicab plays an integral role in helping people get from one location to another, especially in crowded metropolitan areas. Imagine New York City or Las Vegas without their fleets of taxicabs available to help those who do not have a vehicle – or those who choose not to have a vehicle – to traverse the city. Many individuals might think that taxi cab drivers are “professionals” and, as such, are a safe travel option. While many cab drivers take their responsibilities seriously and strive to deliver their passengers to their destination safely, this is not true of all cab drivers (unfortunately). In fact, some cab drivers operate their taxi cabs in a reckless or careless manner. When these cab drivers get into accidents that result in injuries to their passengers, what rights do these passengers have?

Determining Fault in a Taxicab Accident

Taxicab companies may be held responsible for the injuries one of their drivers causes if:

When an injury victim goes up against a taxicab driver and/or taxicab company after suffering injuries in a crash, he or she must be prepared to deal with that driver’s and company’s attorney(s) and insurance company. These individuals and entities will attempt to settle the victim’s claim for as little money as possible, especially if the attorney(s) and insurance company believe the victim may be entitled to compensation. Any proposed settlement is likely to favor the taxicab company’s interests, so it is important to have any settlement offer reviewed by an experienced taxicab accident lawyer before accepting such an offer. You can easily waive important legal rights by accepting a settlement.

Not only this, but the company’s attorney(s) and insurance companies may investigate the role the negligent behavior of the victim played in contributing to his or her own injuries. If such behavior is found to be a contributing factor, the company’s attorney(s) and insurance company will use this information to limit the amount of compensation the victim receives. To avoid this, passengers should take reasonable safety precautions when riding in a taxicab, such as using any seatbelts or restraint systems available, remaining seated throughout the ride, and not distracting the driver.

How an Experienced Taxicab Attorney Can Help

If you do find yourself injured in a taxicab accident, do not wait for the company to offer you a settlement. Obtain medical treatment for your injuries and then contact Stern Law, PLLC at (844) 808-7529 for further assistance. We will help you take the necessary legal steps and actions to preserve your rights so you can focus your attention on your injuries and returning to your life. Where a taxicab driver’s reckless or careless behavior is to blame for your injuries, Stern Law, PLLC will work hard to hold the driver and company accountable for the driver’s actions.