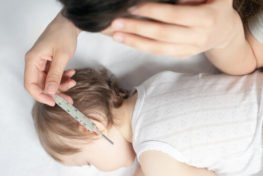 When a family has a new baby, there are many questions and concerns that typically do not lead to any serious events, but when a young child experiences a seizure, it can be terrifying. It is possible that there is a relatively innocuous reason for the seizure and there is no long-term harm, but in many other cases, the seizure is caused by an injury that could have been prevented or a medical condition that could have been treated early enough to prevent long-term harm from seizures.

A seizure is the result of the rapid firing of nerve cells in the brain. These seizures may lead to convulsive movement in various muscle groups or may lead to noticeable changes in the individual’s personality or behavior.

There are different types of seizures, which are described as follows:

A baby who experiences a simple seizure may exhibit convulsing motion on one side of the body and may remain alert during the medical event. The effects of a simple seizure often last for less than 60 seconds, but can be incredibly scary for a parent. A young child who suffers from a generalized seizure will show different affects depending on the area of the brain that is affected, but often lead to unconsciousness in the child. It is critical for a doctor to diagnose the cause of a seizure as quickly as possible in order for the parents to treat the underlying medical condition.

There are many reasons for a baby to experience a seizure. In fact, the relative number of seizures that are experienced by infants and children make them fairly common. However, it is important that a doctor or other medical professional respond properly to the occurrence of a seizure in order to diagnose the cause of the seizure and treat the child appropriately. When the healthcare professional fails to take those actions necessary to determine an underlying cause and prescribe the right course of treatment, the baby may suffer from long-term or permanent harm that could have been prevented. Failing to diagnose a serious medical condition in the mother during pregnancy also may lead to a serious situation where a baby experiences seizures after the delivery.

One type of malpractice involves a doctor who failed to diagnose an expectant mother with a streptococcus B infection, of which the most common is present in approximately 25 percent of women who may not exhibit any symptoms. It is crucial to diagnose the infection and treat it prior to delivery as the infection may be passed to the infant during delivery.

In addition to the need to diagnose the cause of a seizure and treat it in accordance with established medical procedures, the actions of the doctor, nurse, or other medical professional may have caused the damage that led to seizures.

Many seizures are the result of electrical reactions in the brain that are in response to some problem in the baby’s system. A seizure may result because there has been physical trauma to the brain from an external source. If a doctor does not use forceps or vacuum extractors in the correct manner during the delivery process, then it may lead to physical harm that triggers seizures. In addition, an infant could experience seizures after being deprived of oxygen during pregnancy, labor, delivery, or shortly after birth.

Signs that an infant may be susceptible to seizures include:

There are many different types of negligence that may cause or contribute to seizure in infants, but when a preventable mistake has led to long-term suffering of an innocent child, it is important to get the right legal advice as soon as possible.

Stern Law, PLLC Advocates for Infants Harmed Because of Malpractice

When the anticipation and joy of a new baby is overshadowed by fear for the future of that beautiful child, it is critical to have the resources to offer the best possible future. At Stern Law, PLLC, our attorney has more than 30 years of experience in getting the compensation that children injured by medical malpractice need to thrive. We will fight for you as you focus on the needs of your child. Stern Law, PLLC also provides resources for anyone with questions or concerns about seizures or other birth-related injuries. We have knowledgeable and dedicated staff members available 24 hours per day, seven days per week, to answer any questions, regardless of whether or not you are a client. Call us at 1-844-808-7529 or fill out an online contact form in order to learn how we can help you get through this difficult time.