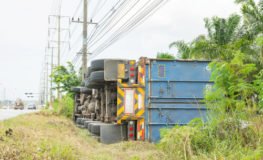 We see them all the time on highways as well as local roads: Large commercial vehicles transporting goods and people from one part of the country to another. Our economy would be significantly impacted if there were no semis or tractor-trailers to deliver products like cars, food, and other goods from the manufacturer or producer to the consumer. Likewise, our ability to travel would also be impacted if commercial busses were not available to provide a cheap alternative to air travel or travel using a private vehicle. As much as large commercial vehicles can help us, they can also hurt us. When a large commercial truck or vehicle collides with a passenger car or other person using the roadway, the results are oftentimes deadly.

According to the National Highway Traffic Safety Administration (NHTSA), in 2013:

The victims and families of truck accident injury victims often experience significant financial hardship in the wake of a truck accident. Medical bills pile up as the injury victim may require several surgeries and/or prolonged hospitalization in order to fully recover. If the truck accident victim has died, the grief of the surviving family members may be profoundly compounded by funeral costs, burial costs, and the loss of that person’s income. The accident injury attorneys at Stern Law, PLLC understands the devastating impact that a truck accident can have and stands ready to help victims and their families hold the responsible parties accountable for their actions.

In order to prevail in court in a truck accident lawsuit, you must generally prove two propositions:

Steps in a Truck Accident Case

Unlike car crashes or motorcycle crashes, crashes involving large commercial trucks often involve unique evidence that must be quickly identified and preserved. If this evidence is not quickly preserved through appropriate legal requests, important evidence about how the crash occurred and whether the truck driver’s employer or others knew or should have known about the likelihood of a crash may be irretrievably lost.

Some of this evidence includes:

Settling with the Truck Driver or Trucking Company

Attorneys representing the insurance companies that insure trucking companies and their drivers often aggressively pursue truck accident injury victims and attempt to get them to settle their claims against the truck driver and/or trucking company. By offering a lump sum of cash (in most cases), these attorneys hope truck accident victims will agree not to pursue legal action against the truck driver and/or trucking company. These settlement offers, however, are not usually large enough to adequately compensate the truck accident victim for all of the losses he or she experienced. Before you decide to accept a trucking company’s settlement offer, you should have the Attorney Ken Stern of Stern Law, PLLC review your settlement offer with you. Our accident injury law firm can help you understand the legal rights you are giving up by agreeing to the settlement as well as provide you with an understanding of the compensation to which you may be entitled if you pursued further legal action.

Truck accident victims and their families are often left devastated and dazed by a truck accident. The physical and mental pain are compounded by the financial pressures these individuals face. Stern Law, PLLC understands this and is committed to helping our truck accident clients obtain the financial compensation they need quickly. Our priority is in helping our clients navigate the often-confusing legal system as efficiently as possible so that they can begin to rebuild their lives after a truck accident.

Contact Stern Law, PLLC today if you or a loved one have been injured in a trucking accident. We offer a free Truck Accident Case Analysis and Strategy Session. You can call the firm at (844) 808-7529, or you can complete our firm’s online contact form for prompt and timely assistance. Do not delay: Contact the Stern Law, PLLC right away following a truck accident and let us help you get the monetary damages you need.

Answers To Your Frequently Asked Questions About Your Truck Wreck Case

I feel I don’t need an attorney because the truck company offered me a settlement right away. What benefit is there to hiring an attorney?

Insurance companies that represent truckers and/or trucking companies have one goal in mind: To settle your case as quickly as possible and for as little money as possible. The amount offered to you by the trucking company may represent a mere fraction of the expenses and losses you will experience as a result of your injuries. This, unfortunately, does not concern the truck company or its insurance carrier. Before you agree to accept a settlement, visit with an experienced attorney who can help you better understand what compensation you will need moving forward.

What relevance does the at-fault truck driver’s driving record have in a truck accident lawsuit?

The driver’s driving record is very relevant, especially when determining whether suit should be brought against the driver’s employer. If a truck driver’s driving record is replete with traffic violations, his or her employer will likely need to have a very compelling reason as to why they decided to hire him or her and what precautions they took to ensure this dangerous driver did not endanger others. In a similar vein, a clean driving record can be used by the driver and his or her employer to suggest that the employer had no reason to suspect the driver was in need of additional training and supervision.

I was taken from the scene of the crash directly to the hospital. I know many attorneys recommend that I take pictures of the accident scene and obtain information from witnesses at the accident scene. What can I do?

First, rest assured that your health is of the utmost importance. While you may have missed out on an opportunity to collect valuable information for your truck accident lawsuit, all is not lost. You should (1) first, write down everything you remember about the crash in as much detail as possible. (2) Next, contact the local law enforcement agency (or have a friend or family member contact the agency on your behalf) and request a copy of the accident report. Oftentimes important information like the names and addresses of the other driver(s) involved and witnesses present at the scene will be contained in these reports. (3) Lastly, contact an attorney as soon as possible. A resourceful attorney will usually have methods whereby he or she can obtain the information you were not able to at the scene. However, the effectiveness of these resources usually diminishes with the passage of time. In other words, the longer you wait before contacting an attorney, the less likely it is that he or she will be able to help you find the information necessary to presenting a compelling truck accident lawsuit case.