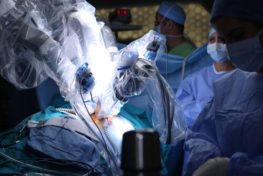 Warning: The da Vinci Surgical Robot Can Cause Serious Complications

Approved by the FDA in 2000, the da Vinci Surgical Robot, (the “da Vinci”), manufactured by Intuitive Surgical, Inc., (“Intuitive”), is a large machine that affords surgeons a wider range of movement, much greater than humans can accomplish. For instance, it allows doctors to perform abdominal surgeries without having to cut open the stomach.

The da Vinci has been used in numerous surgical procedures, such as hysterectomies, gastric bypasses, prostate and gall bladder removals, and thyroid surgeries.

While there may be numerous benefits associated with undergoing a procedure using the da Vinci, many people have reported serious and sometimes fatal complications associated with its use, such as:

The FDA and the DaVinci Surgical Robot

While the FDA has not issued any warnings or recalls of the da Vinci, it has received several Manufacturer and User Facility Device Experience, or “MAUDE”, reports. MAUDE is a public database of reports voluntarily submitted by the public regarding complications associated they have experienced with drugs or medical devices such as the da Vinci robot.

The DaVinci Surgical Robot Has Been Shown to be Dangerous

According to the The Reviews in Urology Journal, surgeons must perform a large number of procedures in order to demonstrate proficiency in using the da Vinci, which may lead to adverse complications while doctors are in the learning curve period. Furthermore, the report indicates that some doctors do not have the requisite patient volume to afford them the opportunity of gaining the experience necessary to perform successful surgeries using the da Vinci.

In addition, some hospitals that spent the $2 million to purchase the da Vinci reportedly have pressured surgeons into using the machine without proper training. This has lead to the increasing numbers of patients who have experienced some of the above complications. Credible medical journals also report several adverse complications associated with the use of the da Vinci in a variety of different surgical procedures.

The DaVinco Surgical Robot in the News

Several lawsuits have been filed against Intuitive due to complications reported by patients who underwent surgical procedures using the da Vinci. For instance, in one of the first cases brought against Intuitive, a father of a young woman filed a wrongful death action against the company due to burns to his daughter’s arteries and intestines as a result of undergoing a hysterectomy using the da Vinci.

The lawsuit claims that the woman’s injuries were a direct result of the machine’s design flaws. In an additional case, the family of a man in Chicago filed a suit against his surgeons due to medical malpractice associated with undergoing a spleenectomy using the da Vinci. Ultimately, the family was awarded over $7 million in damages. Overall, lawsuits against doctors as well as the manufacture of the da Vinci continue to be filed.

It is crucial to speak with a product liability attorney who is qualified to handle the various complexities and nuances associated with suing device manufacturers such as Intuitive. Only skilled lawyers can help victims of the da Vinci Surgical Robot recover monetary damages for costs due to medical treatment, pain and suffering, as well as lost wages. You certainly need an attorney on your side who has the experience necessary to help you get the compensation that you deserve.

Give us a call today to see if you or a loved one may be entitled to recover monetary damages from complications caused by the da Vinci Surgical Robot. Call attorney Ken Stern at 1-844-808-7529, or complete an online contact form for assistance.