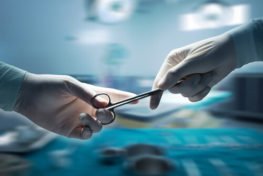 Surgeons have spent decades honing the skills that are necessary to perform critical, and often life-saving, surgical procedures. Despite all the education and training, these doctors do make mistakes, as do other members of the surgical team. Unfortunately, these errors often lead to terrible injuries and fatalities for the victims of the malpractice.

Surgical malpractice is one of the most dramatic forms of medical errors because it usually is very evident that something went wrong at the time of the mistake, or soon after. Other types of malpractice may take weeks, or even months, to diagnose.

Although there are many different types of errors that fall within the classification of surgical mistakes, some of the most common include:

If a person has been injured during surgery and the error did not have to happen if the doctor or other medical professional had exercised reasonable care, then it may be possible to bring a medical malpractice case against the healthcare professional. This does not mean that it always is possible to bring suit if a surgery does not have the anticipated results. It is necessary to take a close look at what happened in order to determine whether the medical professional is liable for the harm that was done. This is done by comparing what a reasonable surgeon or other healthcare provider with similar education, training, and experience would have done under the same circumstances. If the actions that were taken diverge significantly from the established standard of care, then it is possible to bring a successful medical malpractice case.

Stern Law, PLLC Fights for Those Injured During Surgery

When a person has been injured as the result of a mistake made during surgery, the long-term harm may be severe, leading to terrible pain and suffering and terrible financial consequences for the injured patient and his or her family. At Stern Law, PLLC, our attorney understands how far-reaching the impact of a surgical mistake can be; we have spent more than 30 years fighting for the rights of those who have been injured as the result of a medical professional making a preventable mistake. In addition, Stern Law, PLLC has compassionate and knowledgeable staff members available to answer any questions relating to medical malpractice 24 hours a day, seven days a week, regardless of whether or not you are a client. Call us at 1-844-808-7529 or fill out an online contact form in order to learn how we can help you get through this difficult time.