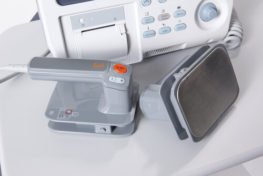 The Saint Jude’s Riata Lead (the “Riata”) is an implantable cardiac defibrillator or “ICD” device that is used to monitor a person’s heart rhythms. Specifically, ICD’s such as the Riata are small devices that are implanted into a patient’s chest that not only monitor heart rhythms, but also provide an electrical shock when the rhythm is abnormal.

Attached to the device is a defibrillator lead, which is a tiny wire that attaches the ICD to the heart and delivers the shocks necessary to restore normal heart rhythms.

Since St. Jude Medical Inc. (“St. Jude”), the manufacturer of the Riata, released the device in 2002, it has faced intense public scrutiny due to the fact that it has been associated with causing the following serious complications:

Following several reports that the lead wires used in the Riata have broken through its insulation sheath and have in some instances, have detached causing perforations to the heart, the FDA issued a recall of the Riata back in December of 2011 – one year after St. Jude stopped selling the product. According to the FDA, defective wires are suspected to remain in over 75,000 patients in the United States who had their implantation procedure between June 2001 and December 2010. Moreover, in 2012, the FDA issued a recommendation that Riata patients have X-rays to determine whether there are any abnormalities with the insulation surrounding the lead wires in their device.

Credible research studies demonstrate that defects in the Riata can lead to serious and life threatening adverse health events. Specifically, in 2007, a study was published in the journal of Pacing and Clinical Electrophysiology indicating that in several instances, the Riata wire detached and perforated the heart wall of test subjects. Moreover, an additional study demonstrates that approximately 15% of patients who received the Riata suffered from insulation abrasion, which occurs when the wires connected to the device protrude through the cable’s outer insulation sheath. Furthermore, according to a study published in the medical journal Heart Rhythm, the Riata had a higher perforation rate than what had originally been claimed by St. Jude – specifically, 3.8%, or 5 out of 130. In another study released by Heart Rhythm, 20 patients reportedly died from defects associated with the Riata.

Since the device’s FDA recall that arising from the severity of complications associated with its usage, patients implanted with the device as well as the loved ones of those who passed away due to its defects, have filed numerous lawsuits against St. Jude, the Riata’s manufacturer. Even more shocking is the fact that shareholders of Riata’s manufacturer has filed a class action suit against the company, asserting that (i) St. Jude failed to information the public about the full extent of problems associated with the ICD device, such as short circuiting, and also, (ii) failed to disclose that other companies who produce similar devices also experienced protruding wires. As a result of this suit, the closing price of St. Jude’s stock experienced an immediate eleven percent decline.

A Lawyer is Ready Now to Help You

It is crucial to speak with an attorney who is qualified to handle the various complexities and nuances associated with suing device manufacturers. Only skilled defective medical device lawyers can help victims of the Saint Jude’s Riata Lead Heart Defibrillator Device and other similar products recover monetary damages for costs due to medical treatment, pain and suffering, as well as lost wages. You certainly need an attorney on your side who has the experience necessary to help you get the compensation that you deserve.

Give us a call today to see if you or a loved one may be entitled to recover monetary damages from complications caused by ICD manufacturers. Call attorney Ken Stern at 1-844-808-7529, or complete an online contact form for assistance.