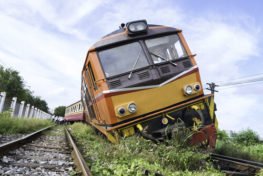 Despite the fact that rail travel is over 100 years old, many people continue to choose to “ride the rails,” either to get to work or to see the country. Train operators have taken steps to convince commuters and travelers that travel by rail is safer and more economical than traveling by car or by plane. There certainly is statistical proof to support the assertion that a person traveling by car is at a greater risk of dying in a car crash than dying in a train wreck, and common sense requires one to admit that the cost of a typical fare is often eclipsed by the cost of operating a car to travel the same distance.

However, train travel is not without its risks. In recent years there have been a number of stories of trains derailing because of negligent operation or colliding with other trains using the same track. Train crashes can be violent events that cause significant harm to the passengers of the train. These passengers need experienced legal counsel to help them obtain monetary damages for their injuries and expenses.

One of the most serious types of accidents that can occur to a train is a derailment. In a derailment accident, the wheels of the train leave the track. The train literally “flies” off of the track and cars of the train will often overturn as part of the crash. Passengers may be thrown about the inside of their cars, and shattered class and other debris can leave passengers with serious cuts and bruises. Broken bones and internal injuries, along with traumatic brain injuries and spinal cord injuries, are also commonplace. A train carrying dangerous cargo may spill that cargo and expose passengers or nearby citizens to dangerous chemicals. Derailments may occur because the train is traveling at an excessive speed or because the train strikes an object on the tracks.

In a train collision, one train will collide with either the front or rear of another train that is sharing the same track. These collisions usually result because either each train’s operator on board the train missed an important traffic control sign or because controllers failed to give important directions to one train or the other. Train collisions can be violent events and can result in a derailment of one or both trains or an explosion an explosion. Passengers who are unrestrained at the time of a collision may be thrown about the cabin, where they can strike their head or body against other seats or other objects.

Once the cause or causes of a train accident are determined and the individuals and entities responsible for the accident identified, injured passengers may be able to file a claim and seek compensation from those responsible for causing or contributing to the crash. Depending on how violent the collision, train accident injury victims may be left with significant medical bills and may require weeks or months of therapy before they are able to return to work.

Compensation obtained through a train accident lawsuit can help these victims by addressing:

What should I do after a train accident or derailment?

Your primary concern following a train accident should be preserving your own life and health. You will likely need medical treatment, so do not refuse medical assistance unless you are certain you have not been injured. Try not to move unless you are in danger from fire or a dangerous chemical if you suspect you have suffered a head, neck, or back injury but instead make yourself as noticeable as possible to rescuers. If you are traveling with family members who are also injured, assist them only if you are able to do so without pain or causing further injury to yourself or to them.

I noticed that some things were “fishy” before the crash – who do I tell?

Suppose that you noticed the train felt like it was accelerating quickly just before it derailed. This is a crucial detail that may reveal who is at fault for causing the derailment. You should make a written record of this and any other observations you have surrounding the crash. Keep this written record in a safe place where you can access it when needed, as you may need to provide statements to federal and state investigators, insurance agents, your attorney, and the court. By creating a written record and using it when giving a statement, you ensure that your account of what happened immediately before the train accident remains consistent.

I was deliberately injured or attacked by another passenger. Who is responsible?

I was injured on a train. It departed from State A and its destination was State B. I was injured while the train was passing through State C. Where should I look for an attorney?

In such a situation, you likely have several places in which you can file your case. You may choose to file your case in the appropriate court in State C, as State C is where the accident happened. You may also choose to file your case in the same state in which the rail company is headquartered or has a corporate presence. This is no trivial decision, so be sure to speak with an attorney in the jurisdiction in which you are thinking of filing your case to determine if that jurisdiction is the most appropriate location for your lawsuit.

Stern Law, PLLC has experience representing passengers injured while traveling by train and is committed to helping these victims obtain monetary damages with which they can begin to rebuild their lives and families. You only have a limited amount of time within which to file a claim for compensation, so contact Stern Law, PLLC by calling (844) 808-7529 today.